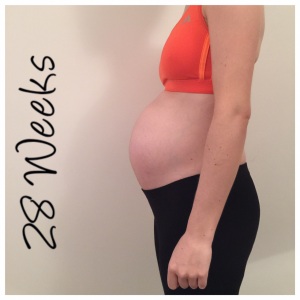 H has been away all of this week at his friend’s weddings in Kos. When he booked it a few months ago I was under the impression I would be huge, uncomfortable and wouldn’t enjoy it – how I regret that decision! Although I’m not huge, I have however got to the uncomfortable stage, but only because I’ve now developed SPD/PGP (Symphysis Pubis Dysfunction/Pelvic Girdle Pain). I had been having some pain around my groin and pelvis area on and off for a while but over the past couple of weeks it has become more constant and more painful. My arthritis also seems to have returned in my knees now that I’m almost a stone heavier.

I had my 28 week midwife appointment this week so I bought it up with her and she explained that it’s due to the relaxin hormone relaxing all the muscles and ligaments around my pelvis and some women just have too much of it so their pelvis moves more than it should. There isn’t much they can do but I can wear a support belt and see a physiotherapist if it gets worse. However everything was ok with baby, heart rate was lower than usual at 140bpm and apparently I was measuring small but baby is now starting to catch up and my uterus was measuring at 27cm. I also had a glucose tolerance test this week for gestational diabetes but that was all clear too.

On Saturday I went to see Take That with H’s sisters which was really good and I even got a seat on the tube as someone spotted I was pregnant this time! It was definitely needed as I was shuffling along by the end of the night due to the SPD pain.

I think the shuffle and pregnant waddle is now a permanent thing unfortunately and after shuffling into town on my lunch break this week to do a bit of shopping, I developed the horrible cramping I had last week when I did too much walking. My pelvis and belly was in so much pain I could barely walk and I only just made it back to the office again. The cramping and pain continued into the night and the next morning so I took it off work to rest and just went in for the afternoon. Since then I haven’t braved walking too far again, choosing to drive to the supermarket on my lunch instead!

I’ve also been buying a lot for the baby this week, I think with H being away, there’s no one around to curb my shopping habit! I bought the Angelcare Bath Support which has been on our list for a while along with the cot mattress and a breast feeding donut pillow. I’m always on the lookout for baby clothing but as I’ve mentioned before, nice, neutral baby clothes are very few and far between. I did spot a very cute set in H&M this week though with a hedgehog print bodysuit and little baby leggings. So far poor Baby G only has 3 outfits! It looks like more shopping is needed!